A layout designed to showcase the collections

The episcopal palace incorporates many historical layers, from the Middle Ages to the 21st century, in both its construction and its interior layout. This results in a mosaic of different architectures giving the visitor two approaches to the museum – the monument and the collections.

The medieval artefacts naturally find a home under the 16th century groin vaults, and the pieces of Bayeux lace are showcased in the 18th century panelled rooms of the bishop’s private apartments. The collections of Bayeux porcelain, sometimes exhibited as though in a  factory, have taken over a contemporary glass island. The visitor is guided through a chronologically arranged succession of rooms in which the artefacts are presented in an eye-catching and attractive way.

To guide visitors through the collections and aid their understanding of the works on display, the museum layout is designed  chronologically in 14 sections spread across 2 floors: the ground floor contains 5 sections going from Prehistory to the Renaissance, and the other 9 sections, covering the 17th to 20th century collections, are on the first floor.

The Bayeux episcopal palace and its precincts occupy a large area in the heart of the medieval quarter. Its complex structure is the result of a succession of  enlargements between the 11th and the end of the 18th centuries. Today the collections are exhibited in the MAHB rooms and arranged chronologically:

1/ Origins : Gothic chapel and origin of the museum
2/ Prehistory : Archaeological remains from the Bessin
3/ Antiquity : The riches of Augustodurum, ancient Bayeux
4/ The Middle Ages : Medieval collections under the Romanesque vaults
5/ The  Renaissance : Influence of the Italian and Northern Schools
6/ The 17th century: “Grand Siècle” collections at the palace
7/ From palace to district court : The former Courtroom
8/ The palace chapel : Treasury of the bishops’ residence
9/ The 18th century : From the “Fêtes Galantes” to the Revolution
10/ The 19th century : Gérard Room, Empire and Restoration
11/ Bayeux lace : the bishops’ drawing room as a showcase
12/ The 19th century :  Caillebotte room, from romanticism to neo-impressionism
13/ Bayeux porcelain : A bridge to the 20th century
14/ The 20th century : The contemporary view 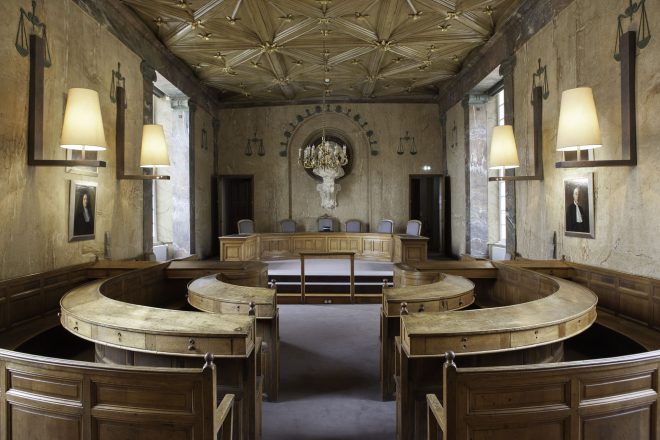 The visit includes a Courtroom and a Renaissance chapel

Within the ceremonial areas of the episcopal palace, one particular room stands out. What had been the bishop’s audience hall became the district court of Bayeux  from 1793 until 1987. Today the room is displayed in its judicial configuration, with the original furniture dating from the period of Louis-Philippe (c. 1840). At the far end of the courtroom there is a magnificent Renaissance chapel, the former private chapel for the bishop which was used as the deliberation room for the court.

Come and visit as a family! With touch pads containing children’s quizzes in the exhibition spaces and a games booklet for children aged 7 upwards, the MAHB makes its collections accessible to all audiences. 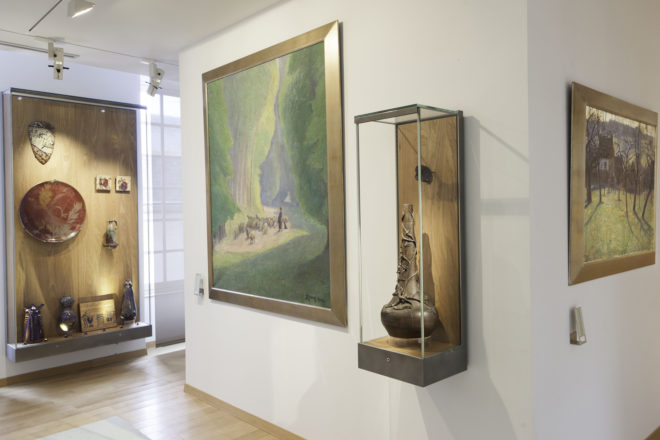 Museum Thursdays and item of the month

Throughout the year apart from the summer holiday period, a programme of themed visits called “Museum Thursdays” goes beyond the plaques to reveal more about the collections.  These monthly cultural events may go into detail about the history of the collections, or focus on a movement in painting, or take a cross-disciplinary, thematic approach to works. In addition, each month a specific piece is featured as “item of the month” in parallel with these guided visits. It may be a new acquisition, a work taken out of storage or a piece which is already on display. For more information, go to the News section. Find out more…