This milestone comes from the D999 road between Saint-Lô and Villedieu-les-Poêles, kilometre 41. It is cylindrical and made of cement. It measures slightly more than a metre high and weighs more than 400 kilos. It is one of the 1,147 kilometre stones set up from 1946 onwards to mark one of the routes used by the troops who had come to liberate Europe – in this case the route used by General Patton’s armoured units of the American 3rd Army. This milestone came into the Memorial Museum of the Battle of Normandy’s collections after work was carried out on the road.  Most of these cement milestones have gradually been removed or replaced by copies made of lighter materials, because they proved to be dangerous in the event of road accidents. 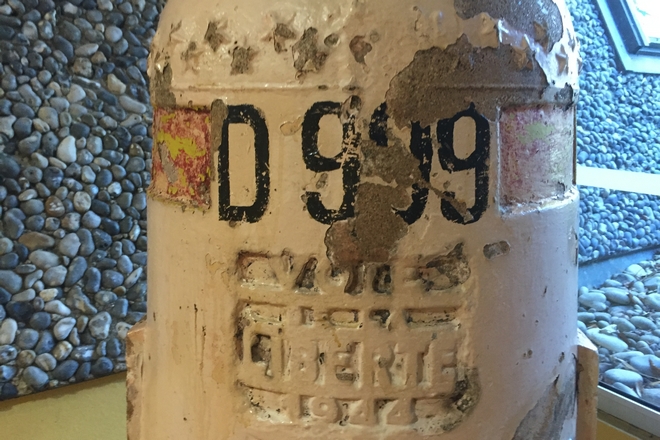 This milestone is an allegory of Liberty:

– its rounded top is circled with a decoration of 48 stars, representing the then 48 states of the United States.

– in the centre is a torch of Liberty, based on the torch of the Statue of Liberty in New York

– finally, the base of the milestone is painted with waves to show that the Liberators crossed the ocean to liberate Europe.