The Battle of Hastings

The Battle of Hastings, a great medieval military feat

On 14 October 1066, the Battle of Hastings, fought against the army of Harold Godwinson, last of the Anglo-Saxon kings, was the decisive event in the conquest of England by William, Duke of Normandy. The Bayeux Tapestry, with its countless details embroidered on linen cloth, serves as a unique representation of one of the greatest battles of the Middle Ages.

William assembled his soldiers from the late summer of 1066 in an encampment at the mouth of the river Dives.

Having called on his Breton, Frankish and Flemish vassals and allies to provide their support for the conquest, William even managed to obtain the Pope’s blessing for his claim to the throne of England. The vast forests of oak near the river were used to build an impressive fleet of about a thousand ships that were able to transport an army estimated at 8,000 men and 5,000 horses across the sea.

“He thus assembled an immense army of Normans, men of Flanders, Franks and Bretons, and once his vessels were ready, he filled them with fine horses and strong men equipped with hauberks and helmets”. 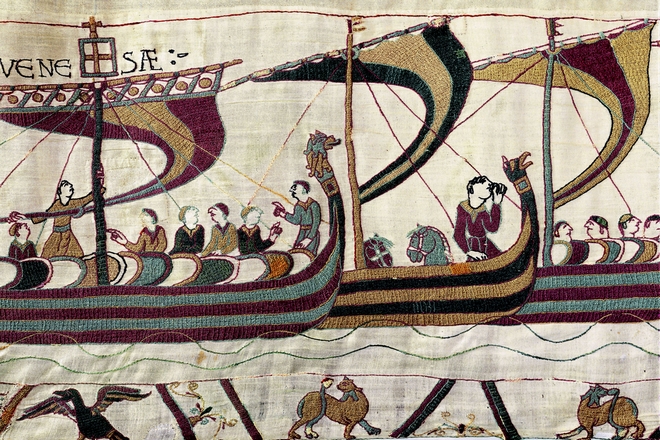 William and his fleet crossed the Channel unhindered during the night of 28 September 1066, and landed at dawn on the beach of Pevensey, on the south coast of England. At that time Harold was fully occupied with another conflict in the north of the country against the king of Norway, Harald Hardrada, who had also laid claim to the throne. After defeating Hardrada at Stamford Bridge on 25 September, Harold Godwinson had to march south with all speed in order to confront the Norman invaders. William and his companions made use of this breathing space to prepare for the confrontation and built a wooden stronghold at Hastings to protect the Normans’ position.

William prepares for the battle

In the morning of 14 October 1066, William divided his forces into 3 groups – the Bretons on the left flank, the Normans in the centre and the Franks and Flemish on the right. Archers, foot soldiers and cavalry were organised under the duke’s leadership. “He placed foot soldiers armed with arrows and crossbows in the lead; foot soldiers in second position too, but safer and equipped with hauberks; and in the rear the squadrons of cavalry, and he took his place in the midst of them with the elite; from there he was able to direct from all sides using both voice and gestures”.

Harold’s troops, approaching under the cover of woodland, took up their positions on the top of a hill.  The high position allowed them to harass any soldiers attempting to climb the hill by throwing a variety of missiles at them before pushing them back in hand-to-hand combat.

At the height of the battle of Hastings

As the Normans struggled to dislodge Harold’s soldiers from their hilltop position they suffered severe losses, making the battle start to turn in the Anglo-Saxons’ favour. A rumour then spread – that Duke William himself had perished in the fighting. Some of the Norman troops retreated towards the sea, pursued by the English who at last left their positions at the top of the slope. As he watched their flight, William, very much alive, rushed before his companions and removed his helmet so that everybody would recognise him. After being so close to defeat the Norman horsemen returned to the front and seized the edge in the battle.

Harold himself, marching with the first row of his horsemen, was covered in mortal wounds and perished. 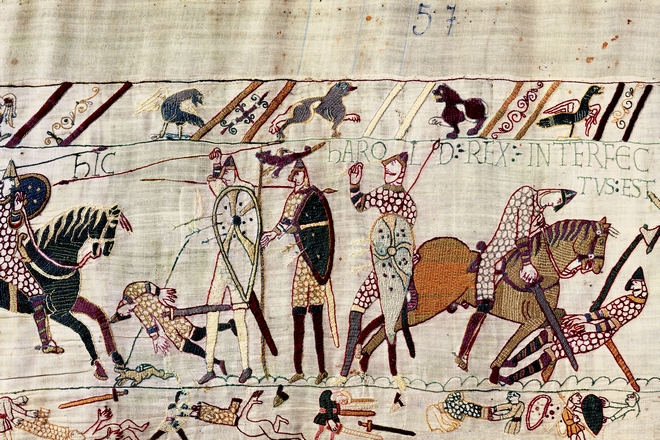 The death of Harold and William’s accession

As evening was falling, King Harold fell. In one of the Bayeux Tapestry’s most famous scenes, he is shown wounded in the face by an arrow. The Anglo-Saxon troops finally succumbed to the Normans’ repeated attacks and fled through the woods. At the end of an entire day of fierce battle, William of Normandy’s men were the victors, Harold Godwinson was dead, his troops routed and the road to London was wide open. On 25 December 1066 William was crowned King of England in Westminster Abbey. His achievement earned him the title “the Conqueror”.

Foire aux questions
What historical event is depicted in the Bayeux Tapestry?
+

The Bayeux Tapestry depicts the Battle of Hastings in 1066, when William, Duke of Normandy crossed the Channel with his fleet to conquere the throne of England. This 70-meter embroidery chronicles the conquest of England by the Normans in the 11th century when Edward the Confessor, the King of England, died without children to succeed him.