The Bayeux Tapestry or the story of a conquest

The Bayeux Tapestry is a masterpiece of 11th century Romanesque art, which was probably commissioned by Bishop Odo, William the Conqueror’s half-brother, to embellish his newly-built cathedral in Bayeux in 1077. The Tapestry tells the story of the events surrounding the conquest of England by the Duke of Normandy.

The story told by the Bayeux Tapestry begins in 1064, when Edward the Confessor, King of England, instructs his brother-in-law Harold Godwinson to travel to Normandy in order to offer his cousin William the succession to the English throne. Although the end of the embroidery is missing, the story ends with the Anglo-Saxons fleeing at the end of the Battle of Hastings in October 1066….

The events surrounding the 1066 invasion of England

In 1064, Harold’s ship sails towards the coast of Normandy. After many difficulties, he sends a message to William Duke of Normandy: the King of England has designated him as his heir to the throne.  When the old king dies, Harold has himself crowned instead of the Duke of Normandy. Hearing this news, William decides to cross the Channel in 1066 to reclaim his throne…

On a September night in 1066, several hundred ships set sail, with  seven thousand men and  about two thousand horses on board. Among the boats is the ducal ship given by the duchess Matilda: the Mora stands out with a lantern blessed by the Pope at the top of its mast. In the morning the fleet makes landfall at the little port of Pevensey in Sussex and the Normans make their way towards Hastings, where they take up their positions.

On 14 October 1066, the decisive battle between Norman and Anglo-Saxon troops begins.  The archers set off first, then the Norman cavalry follow in a long cavalcade, swooping on the English infantry, protected by a wall of shields.  There are so many dead that they take over the lower frieze of the Tapestry.  The fighting  is intense, horses are falling, limbs are severed….In the end, Harold is hit in the eye by an arrow and dies in the battle. The retreat by the English troops becomes a rout. This, the evening of 14 October 1066, is the abrupt ending to the story told by the Tapestry.

The Tapestry is both an account of an epic military story, and a spiritual work about how an act of perjury is punished. 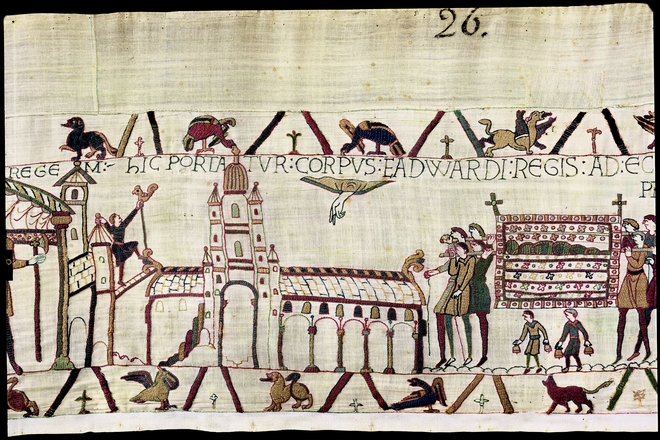 The Bayeux Tapestry is an account of the medieval period in Normandy and England like no other. It provides information about civil and military architecture such as castle mounds, armour consisting of a nasal helmet, hauberk and oblong shield and seafaring in the Viking tradition. Through the great number of items depicted, it also gives precious details of everyday life in the 11th century.

« Dex aïe ! » the Norman war cry was at the same time an appeal to God, a call for help and a shout of encouragement on the battlefield. 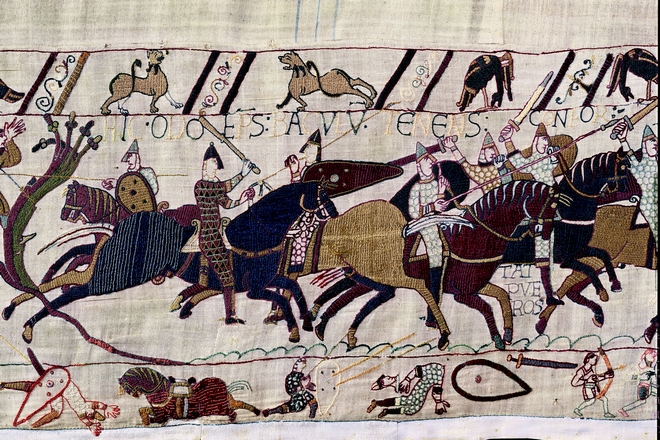 The friezes, backdrop of the Bayeux Tapestry

The central panel is framed by friezes measuring about 7cm (approx 3 inches) each. The friezes depict animals, both real (e.g. birds, lions, dogs, deer) and imaginary (e.g. griffins and centaurs). Aesop’s fable of the Fox and the Crow is also represented.  Similarly, the lower frieze is used to depict the dead on the battlefield in the final scenes.